My first real backpacking trip was in Europe, where I spent 50 days traveling to 13 countries and 34 cities. At the end of it all, when I looked back thinking about which city was my absolute favorite, Budapest came to mind. While in some cities I experienced stunning sights, and in others I enjoyed myself to a great extent, Budapest had the best of both worlds. In no particular order, here are all the reasons that I ended my trip with Budapest as my number 1!

There are two sides!

We all know it’s called Budapest, but something a lot of people don’t know is that there are two sides to the city – One side is Buda, one side is Pest, and both are really great to explore. Walking across the bridge provides you with a stunning view of both sides, and if you take the free walking tour like I did, they’ll take you to see everything you need! 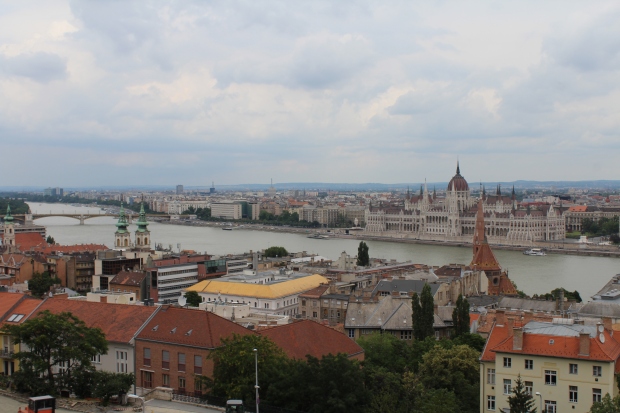 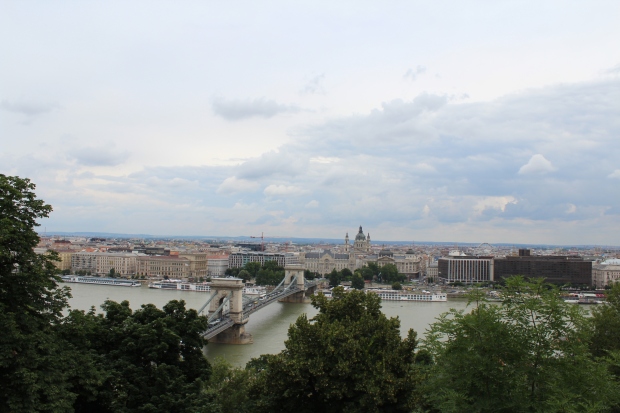 There were countless Hungarian Jews that were affected by this genocide, and as a Jew myself, I always appreciate seeing any memorials or museums dedicated to the Holocaust.  Budapest not only had a memorial museum, but along the Danube Bank of the river, there is what they call Shoes on the Danube Bank, and it is there to honor all the Jews that were stood up along the bank and shot into the water. The memorial is comprised of many metal shoes that symbolize the shoes worn by those who were shot. 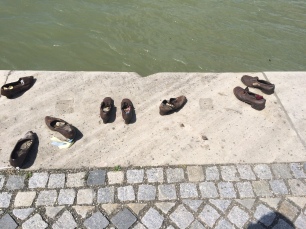 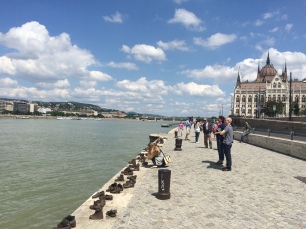 Wall of photos of the Hungarian victims of the Holocaust.

Many interesting people to run into.

The Buda Castle in Budapest has a changing of the guards which is very interesting to witness, as are most changing of the guards. Of course you’ll see all the children trying to make the guards laugh (and not succeeding). Also, one of the days I was there, there were a small number of people running around in banana costumes… Not really sure what was happening and if that was a regular thing, but it sure was funny! There was also tons of street musicians playing really fun and interesting music. 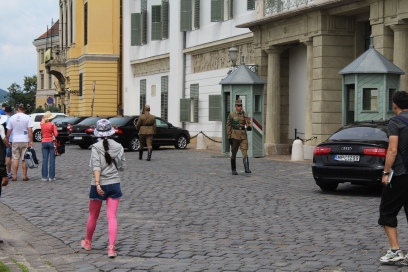 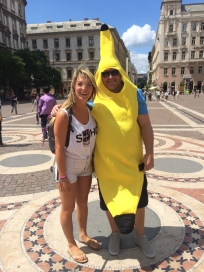 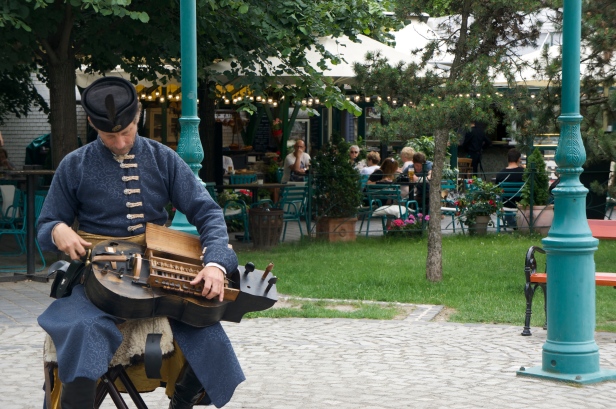 Both the traditional and non traditional Hungarian food in Budapest was absolutely amazing! First, the Hungarian chimney cake, which is a really tasty dessert that you can get from cafe’s or street carts, is so delicious! And you can pick different flavors, which is always great. We also had a meal at a random restaurant on the street and we ordered some traditional Hungarian goulash, and it was hands down the most delicious goulash I’ve had in my entire life! I wish I remembered the name of the place, but whenever I go back to Budapest, I’ll go on a hunt to find it again. And… sushi! I’m a sushi fanatic, and back home I was working at a sushi restaurant and eating delicious raw fish rolls on an average of 5 times a week. So going on this trip and not being able to eat sushi was definitely difficult, and the couple times we did go to a sushi restaurant, we were extremely disappointed. Budapest was the first city in Europe that had sushi up to my standards! I was blissfully happy that day. 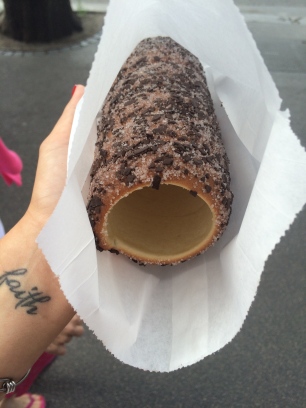 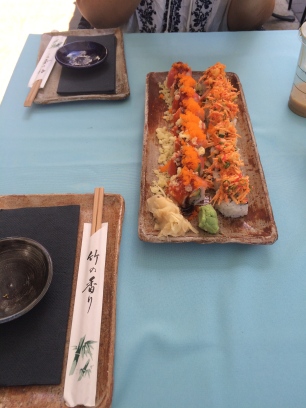 (I was too excited about the goulash to remember to take a photo… You’ll have to take my word for it).

Fisherman’s Bastion is like the Disneyland of Budapest! Until I finally learned what the name of it was, I just called it ‘Fairy Tale Land…’ Clearly I’m not all that creative, but it really was like a fairy tale land! The buildings looked like castles, and at times I felt like I was walking through Snow White’s enchanted forest! There were food carts, and music, and it was a really fun place to walk through and spend a bit of time in. 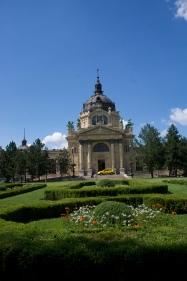 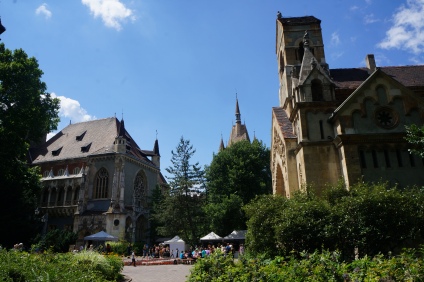 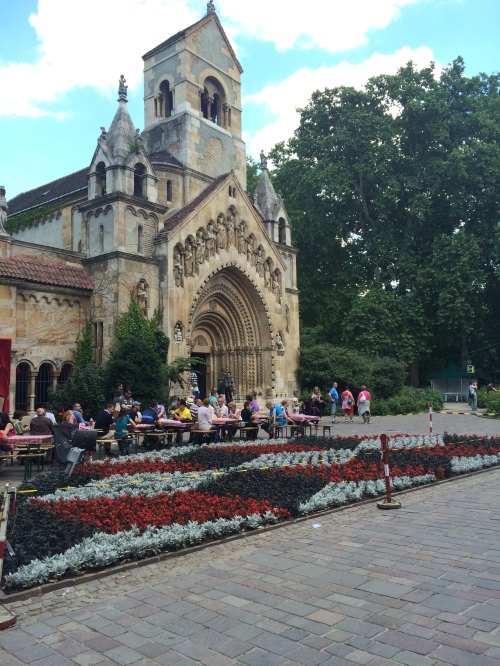 Really fun bars for your nights out.

Budapest definitely has a nightlife, and there are many bars and clubs to choose from! Again, I don’t know the names of these, but that’s probably due more to my state of inebriation more than being excited to eat… It’s really easy to bar hop in Budapest and find tons of fun places to enjoy some drinks! We ended up at a karaoke bar at one point and I decided to do karaoke for the first time in my life (I’m an awful singer… So I just stuck with ‘My Humps’ by the Black Eyed Peas). It was a really fun place to take some shots, and enjoy myself with new friends. 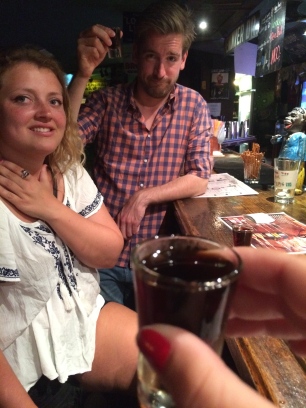 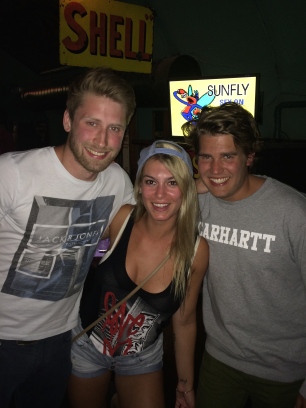 They have a boat party!

Okay… This boat party was AWESOME. I booked it through my hostel, and I’m sure most hostels will help you book it as well. Pretty much, you go on a boat, and for a few hours on that boat you can drink unlimited beer, wine, and champagne. The boat doesn’t stay in one place though – it actually goes down the river between Buda and Pest, and you get to drink and meet people with the most breathtaking view of the city and Parliament at night behind you in all its glory! After you get off the boat, everyone high tails it to a club where you get free entry (just don’t take off your wristband from the boat… That’s your free entrance to the club!) I 100% recommend this to anybody visiting Budapest and is looking for a good time. 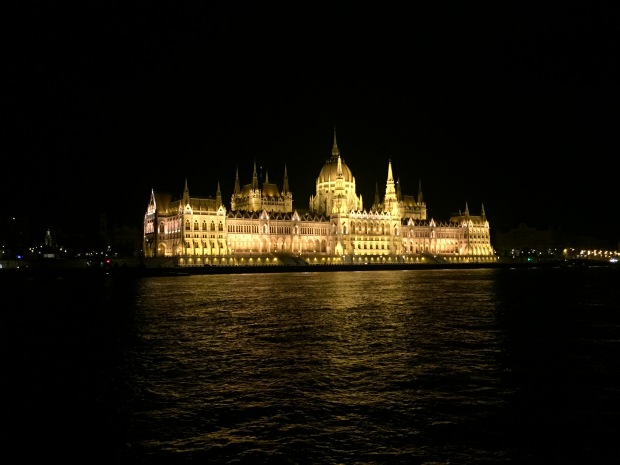 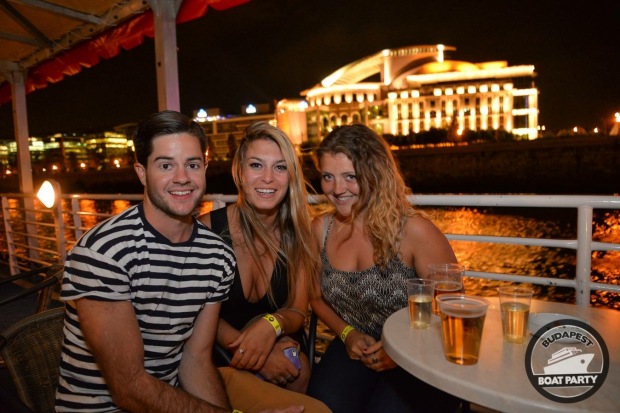 The architecture in this city is absolutely AMAZING. Its Art Nouveau style is stunning, and each building seems to get better and better. So Budapest isn’t just a city with lots of fun things to do, but also one of the most gorgeous cities I’ve been to in Europe. I definitely can’t get enough. 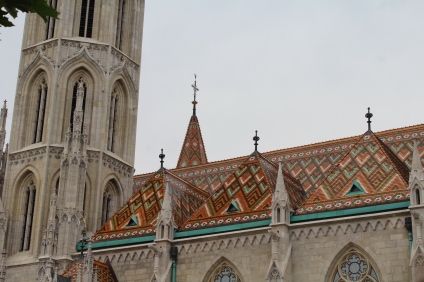 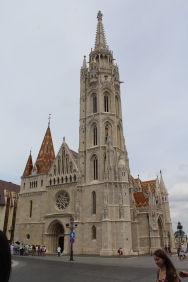 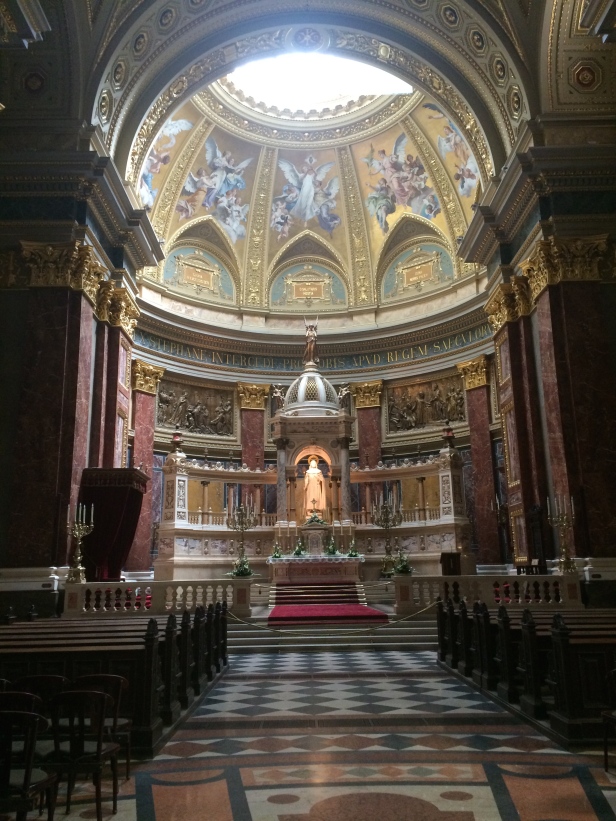 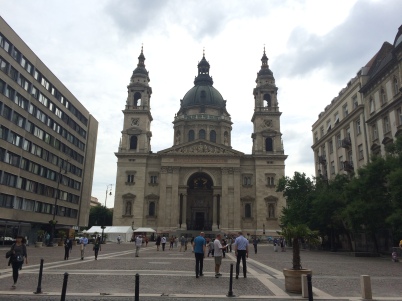 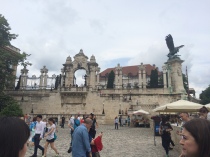 Last but definitely not least… The famous thermal baths!

Budapest is majorly known for its number of different thermal baths you can go to and spend some time. The most famous one is the Szechenyi Bath, and this was the one we chose to go to. You can get a locker to put your things in, and then go swim and chill out in the warm and relaxing waters. It’s not just a huge pool either! There were fountains, and even a circular area closed off with stone where the water suctions you around and around in a circle. The baths are a great way to enjoy a couple hours in the sun! 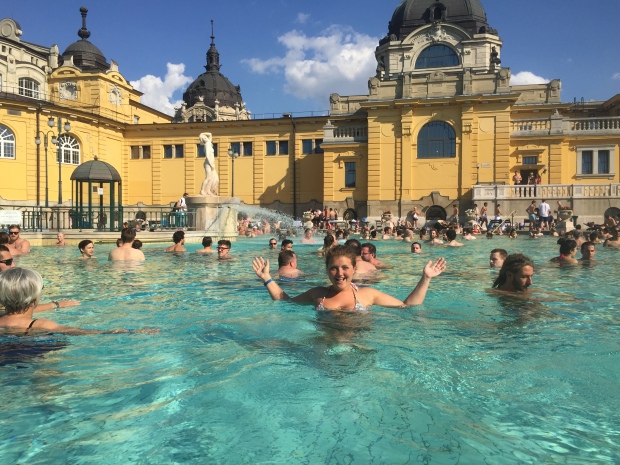 Overall, Budapest was an incredible time, not just in terms of partying and drinking, but also really feeling and seeing the city. It’s a gorgeous place and should definitely be on your next European itinerary!

Ancient castles and Berber villages. 🌵
That time @bonvoyagedarling and I slept in a parking lot across the street from the Cliffs of Moher so that we could catch the sunrise without anyone else there to bother us🌞
Castle in the clouds 👑☁️
Today's torrential downpour makes me really miss sunny blue skies and spending my days in a swim suit☀️
Exploring Stockholm by bike 🚴🏼‍♀️
Ladies View is a MUST when doing a road trip along the Ring of Kerry in Ireland. Definitely one of the most stunning sights I've ever seen.